In the Arab culture, the bridegroom would solicit the permission of the bride’s father before he proposes. Thereafter, a date is set for the “asking”, where his family goes to the bride-to-be’s house to ask her family to consent to the union.

Thirty-five members of Jonas’ family arrived at JoMarie’s house with a cart filled with bread and fruits to signify the breaking of bread between two families. After a dinner feast, the engagement party and wedding was planned.

The bride’s agenda on the morning of the wedding included the Blessed Sacrament and Confession with her family (which provided her a sense of peace for the day). Thereafter, bridesmaids arrived at her house and groomsmen at Jonas’ house. The bridal party proceeded to the church, and finally to the reception after a quick detour at an aunt’s house to take photographs.

JoMarie bought her Vera Wang dress from Ever After boutique in Miami. It was the first dress she tried on; she fell in love with its simple sweetheart bodice and ballroom skirt with individually ruched silk organza and tulle bunches. Her shoes, with its tulle and organza front, perfectly complemented her dress. Her earrings were “something borrowed” from her godfather’s wife.

The wedding reception décor comprised centerpieces elevated on glass pedestal martini glasses with white dendrobium orchids imported from Indonesia. The head table was adorned with orchids, roses and anthuriums. The corridor leading to the ballroom was transformed into a magical secret garden with hanging vines and trellises. Fresh flowers and foliage were used throughout.

The five-tier wedding fruitcake was designed by the bride’s mother and mother-in-law to complement her gown; the designers’ vision was executed by Ann Whitby.

The couple opted for drumbaki (Arabic) drumming in addition to their disk jockey. The bridal party entered the reception ballroom to the sounds of both Arabic music and drumming.

What were the most memorable moments?

JoMarie: My bridesmaids were lifting my dress and singing, “We’re going to the chapel and we’re going to get married” as we walked to the car which would take us to the church. I started to cry as the reality that this was my wedding day sunk in.

Walking into the reception, with my husband and the bridal party, to Arabic drums, and waving handkerchiefs, was a moment that I would never forget. This is also the moment where the bride is welcomed into the groom’s family.

During an interlude my mother had my cousin sing Martina McBride’s I Hope You Dance as a surprise to me. This was very heartfelt and touching. I would also never forget dancing with my father and looking over to see Jonas dancing with his mother.

The most sentimental moment?

JoMarie: Our four grandmothers carried the Offertory at the church; it was extremely special to us to have all four grandmothers present as our grandfathers have passed away, and not many couples can boast this honour.

What were the most unique things about your wedding?

JoMarie: We wanted our wedding to reflect our Trinidadian and Syrian/Lebanaese cultures so we included a Chow bar, an Arabic coffee bar, an argyle/hookah station with Arabian rugs and couches as well as doubles (which came out later in the night after the party got under way). Another unique element was a picture slide show of what happened that day, before the wedding (my bridesmaids and I getting ready as well as Jonas and his groomsmen), as you don’t usually get to see this taking place. 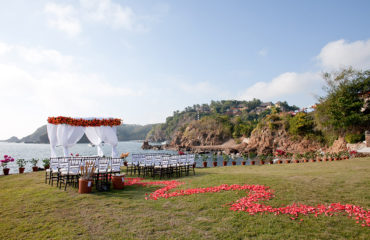 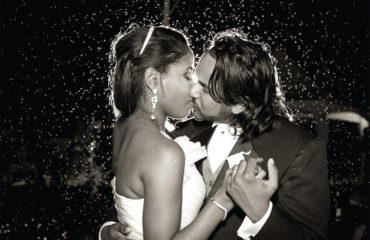